My recent and previously unexplainable fascination with Jillian Michaels hasn’t come from a place of admiration, but quite the contrary. Jillian Michaels annoys the crap out of me. However, after immersing myself in decades of personal development, I’ve come to know a great truth in the people that you don’t like will be your greatest teachers. As uncomfortable as that can be to admit, it’s unequivocally true. It can take an inordinate amount of courage and vulnerability to face, but amazing breakthroughs lie just on the other side of facing that discomfort. 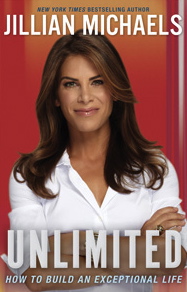 My recent and previously unexplainable fascination with Jillian Michaels hasn’t come from a place of admiration, but quite the contrary. Jillian Michaels annoys the crap out of me. However, after immersing myself in decades of personal development, I’ve come to know a great truth in the people that you don’t like will be your greatest teachers. As uncomfortable as that can be to admit, it’s unequivocally true. It can take an inordinate amount of courage and vulnerability to face, but amazing breakthroughs lie just on the other side of facing that discomfort.

Imagine a person that you just can’t stand, perhaps it’s the one you blame for you having to “do over?” If there is such a person, that would be a great place for you to start as you start over in life. Once this person is identified, the empowering question to ask yourself is “What is it about that person that you don’t like about yourself?” When answered authentically and honestly, it will produce a very vulnerable you. Most people identify “weakness” with a word like “vulnerable,” but what most don’t know is that people are at their most powerful when they are vulnerable. It’s counter-intuitive, I know. Trust me, though.

So, back to Ms. Michaels! Jillian evokes within me emotions of annoyance, irritation and envy. Typically, it would take a personal interaction for most people to experience such negative emotions. For some reason, Jillian Michaels (a person I’ve never met) has been a catalyst of an array of awkward and uncomfortable feelings for me. Thankfully, I’m mature enough to recognize this as a “me” problem, not a “Jillian” problem. Nonetheless, the emotions are real and they must be dealt with, and Jillian Michaels likely offers at the very least a gateway to the answers. The first step to resolving such a problem is acceptance, the second is to take responsibility. Here we go… where is “me” the problem? Hopefully, you’re playing along with me using the person you imagined earlier.

Initially, I thought what I didn’t like about Jillian was that I would never allow anyone other than a Marine Corps Drill Instructor to get in my face the way Jillian does with her Biggest Loser contestants. Where does she get off? She hasn’t earned the right to yell at people like that! Those were my thoughts, but there’s got to be more to it than that because that’s silly. Unless I found myself on her show, I would never have to deal with her screaming at me. Besides, if I found myself on the Biggest Loser, I would have bigger problems than Jillian in my face. No, there’s more to it as that’s not enough to upset me in the way that I can get.

After a slightly deeper look within myself, I thought my source of discontent for Jillian could be rooted in the fact that she subconsciously reminded me of my ex-wife given Jillian being so loud, intense and opinionated, oh… and cute, too. Ah! There might be something here?! I remember my first date with my ex-wife I had told her how she walked a fine line between being obnoxious and charming. As she is now my ex-wife, obviously the obnoxious quality eventually overtook the charming one. All that being said, my split with my ex-wife was amicable and mutually beneficial. I wish her the best.

Yes, there could be something with the “ex-wife” thing, but it didn’t seem that I had found “thee” answer to what was ailing me. Given I don’t know Jillian personally and couldn’t call her to discuss this, I decided the next best place to look for answers would be to purchase her new book “Unlimited.” So I did. Almost immediately, I noticed uncanny similarities to my book Do Over. In fact, my first thought was “I’m glad I released my book first” as the similarities often times seemed more than coincidental. Later, I would conclude the similarities are not coincidental, but spiritual. As I got deeper into the book, what bothers (or I should write “bothered”) me about Jillian began to surface. First, it was obvious we have an almost identical library of books, interests and heroes. Second, based on the stories she shared and the points she made from those stories insinuated we have (or had) very similar insecurities growing up and as adults. Third, based off the information she shared about the relationship she had with her father growing up, I would say we’ve had an identical experience in that regard. Fourth, it was obvious she takes her own personal development as seriously as I do. She’s willing to be vulnerable, she’s willing to look at her own weaknesses and she’s willing to take responsibility for her own experiences and results. I found my emotions rapidly moving from irritation and animosity to empathy and compassion. In its simplest, and most embarrassing, form… I’m envious of her success. That’s painful to write, but… I found it! By seeking to understand her first rather than walking around in fantasy land waiting for her to understand me (like that was ever going to happen), I found release from my disempowering emotions. I discovered that (as much as I can discover from a book) that we’re more alike than not. In fact, I think we would be buds if we ever met. How is that for transformation?!

I got sidetracked somewhere and lost focus of my own definition of success and started to compare my current situation and circumstances to the success of Jillian. Although I wrote an entire chapter in Do Over on this very thing and how it can be a life sentence (unless recognized) of unfulfillment, life can happen to all of us. However, it’s not life’s happenings that will determine where we end up, but it’s how we react to life’s happenings that will.

My newly found respect for Jillian Michaels was further bolstered by the “personal development” content from her book. What most books of our genre have in common is 1) Define your dreams, 2) Plan the work and 3) Work the plan. Where self-help books commonly differentiate is within the strategies and techniques of how to go about working the plan and achieving those dreams. Jillian addresses in great detail what I concur to be the most powerful aspects of getting what you want out of life. I loved Unlimited as I re-read from a different perspective the very lessons I teach on a daily basis and personally experienced new insights. Unlimited is a complete guide to living life to the fullest. I’m a fan, a BIG one!

There are two things I hope you to get from this post, and they come with homework, too. First, identify someone in your life that annoys the crap out of you. Spend some time with the question, “What is it about them that I don’t like about myself?” Take your time with this and work through it until you get an “Ah ha!” moment. It will take some courage to be that honest with yourself, but I promise that there is a life-altering breakthrough in it for you. Freedom is yours for the taking when living a life of “First seek to understand, then be understood.” I actually smile now instead of grimace when I see an image, or hear, of Jillian Michaels. I’m free from the negative emotions, and it’s all because I chose to take on this exercise. Second, buy Jillian Michaels’ new book Unlimited. If you liked Do Over, you’ll like Unlimited. You might even like it more. Click here to buy from Amazon.com. Cheers, peace and blessings to you, and a big “thank you” to Jillian for being who you are for the world of health and wellness… and who you’ve been for me.

Newer PostThe Strangest Secret | DO 22
Older PostHow Michael Jordan Can Help You With Your Do Over? | DO 21